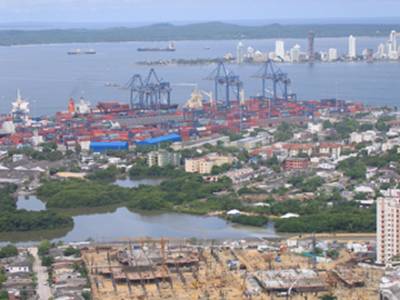 The Port of Cartagena (Photo courtesy of the U.S. Trade and Development Agency)

Colombian authorities detained a China-flagged ship traveling to Cuba for illegally transporting around 100 tons of gunpowder and other materials used to make explosives and arrested the captain, the attorney general's office said.

The vessel was stopped on Saturday in the northern port of Cartagena, on the Caribbean coast, after the materials were detected during inspection. The cargo was listed in the ship's records as grain products.

"Around 100 tons of powder, 2.6 million detonators, 99 projectiles and around 3,000 cannon shells were found," Luis Gonzalez, the national director of the attorney general's office, told reporters.

"The documentation that the captain had in regards to the merchandise that was being transported in the China-flagged vessel did not correspond to what we found."

The ship's captain will be seen by a judge, Gonzalez added, while other officials said he could be charged with illegal transport of military materials.

The attorney general's office did not release any further information about the ship or its crew.