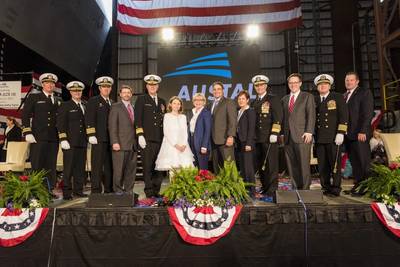 Ship’s sponsor, Mrs Kathy Taylor, former Mayor and current Chief of Economic Development for the City of Tulsa, Oklahoma, was joined by Austal USA President Craig Perciavalle and officers from the US Navy for the christening of the future USS Tulsa at Austal USA’s Mobile, Alabama shipyard on 11 February 2017. (Photo: Austal)

Austal Limited has announced that Austal USA has hosted the christening of the future USS Tulsa, the 8th Independence variant Littoral Combat Ship (LCS) designed and constructed for the United States Navy (USN).

In addition to the USS Independence (LCS 2) and Coronado (LCS 4), Austal USA is delivering 11 Independence variant LCS to the USN, under a contract valued at approximately US$4 billion.

Commenting on the Tulsa christening, Austal Chief Executive Officer David Singleton remarked, “Austal’s LCS program began with a unique, innovative design solution developed in Australia, specifically for the United States Navy. Now, as the program matures and more LCS, like Tulsa, are constructed, the true value of the program to Australia’s shipbuilding capability and defence export industry is becoming evident.

“Austal’s LCS program has not only contributed to the economic growth of the City of Mobile and the State of Alabama but importantly has provided genuine opportunities for Australian-based Austal shipbuilding professionals, contractors and suppliers to develop industry leading skills, products and export capability,” Singleton added.

Following the delivery of LCS 10, USS Gabrielle Giffords to the USN on  December 23,  2016, Austal USA has 6 x LCS under construction.

Omaha (LCS 12) and Manchester (LCS 14) are preparing for sea trials in March, final assembly is well underway on Charleston (LCS 18) and modules for both Cincinnati (LCS 20) and Kansas City (LCS 22) are now under construction in Austal’s advanced Module Manufacturing Facility (MMF).

The future USS Tulsa (LCS 16) will be launched in March is scheduled for delivery in 2018.