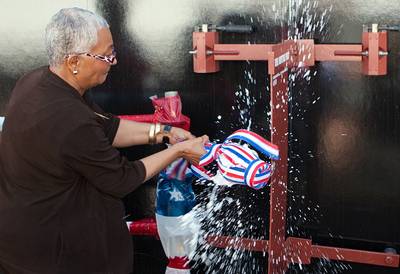 More than 1,000 people attended the Saturday morning christening ceremony at NASSCO's San Diego shipyard.  Secretary of the Navy Ray Mabus was the ceremony's principal speaker.  Alexis (Jackie) Bolden, wife of NASA Administrator Charles Bolden, served as the ship's sponsor.  She christened the ship by breaking the traditional bottle of champagne against the vessel's hull.

"NASSCO delivers high-quality, mission-ready ships to the fleet and MLP 1 is no exception," said Fred Harris, president of General Dynamics NASSCO.  "NASSCO's performance on the MLP program is a direct reflection of our design-build strategy.  When MLP 1 construction began, 100 percent of the design was complete, nearly all the production planning was complete, and all the material to support production was in the pipeline.  The result of this rigorous approach to shipbuilding is a high-quality, affordable vessel that was 91 percent complete at undocking and now more than 97 percent complete at christening.  MLP 1 is on track to be delivered under budget and on-schedule."

USNS Montford Point is the first ship of the Montford Point Class (T-MLP).  MLP ships will serve as a floating base for amphibious operations, and operate as a transfer point between large ships and small landing craft.  Following its at-sea testing phase, USNS Montford Point will be delivered to the Navy in the second quarter of 2013.