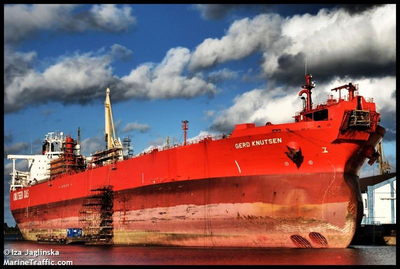 U.S. refiner Citgo said the Gerd Knutsen oil tanker, which had been carrying crude claimed by both the company and Venezuelan parent PDVSA, departed Venezuela's Jose Terminal on Thursday and entered international waters on Friday morning.

The tanker over the past week discharged its 1 million barrel cargo, worth some $57 million, in Venezuela after being stranded for over a year off the South American country's coast amid fallout over U.S. sanctions on PDVSA, designed to force out socialist President Nicolas Maduro.

The tanker discharged after Citgo, now controlled by the Venezuelan opposition, sought an order from a U.S. court seeking to block the tanker from returning its cargo to PDVSA. But a Caracas criminal court ordered the tanker, which was still in Venezuelan territorial waters, to discharge in the country.

The Gerd Knutsen is now sailing toward the Caribbean island of Aruba, according to Refinitiv Eikon data.