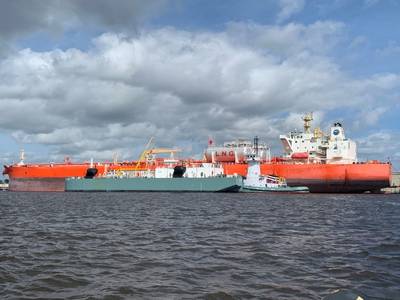 The Clean Canaveral, a new liquefied natural gas (LNG) bunker barge operating along the coast of the southeastern United States, recently completed its inaugural bunkering in Jacksonville, Fla. The Clean Canaveral has a capacity of 5,500 cubic meters, making it the largest Jones Act LNG bunker barge. The vessel operates as an articulated tug barge unit (ATB) and is owned by Polaris New Energy LLC, a subsidiary of Seaside LNG Holdings.

The operation marks the first barge-to-ship cool down performed in the United States. LNG was loaded onto the Clean Canaveral at the Jacksonville dock of JAX LNG, a joint venture between Seaside subsidiary Northstar Jacksonville and Pivotal LNG, a subsidiary of BHE GT&S. The Clean Canaveral then transferred approximately 600 metric tons of LNG to cool-down and bunker the tanker Eagle Brasilia, owned by AET.

“As expected, the Clean Canaveral performed very well during the bunkering process. The McAllister Towing crew operating the ATB, our vendors, regulatory agencies, JAXPORT and Polaris worked seamlessly together to ensure we were prepared for a successful bunkering,” said Tom Sullivan, Senior Vice President of Operations for Seaside. “In addition, the working relationship between AET, its ship-manager, Eaglestar, and the crew on the ATB was key to the safe transfer of LNG. We greatly appreciate AET’s confidence in our ability to safely conduct this inaugural bunkering.”

Tim Casey, Senior Vice President of LNG for Seaside said, “It’s rewarding to see the Clean Canaveral accomplish this step as it represents the culmination of years of hard work by many people. We have additional bunker deliveries already scheduled for later this month and are actively growing our customer base to supply much needed last mile logistics services.”

Mac Hummel, Chief Executive Officer of Seaside added, “We’re excited to help lead the maritime industry’s transition to a lower carbon future. The environmental benefits of LNG as a next generation fuel for our maritime customers are well established. I thank Tom and Tim for their leadership in making the physical deliveries of LNG via the Clean Canaveral a success.”

Roger Williams, VP Commercial LNG and Gas Development at BHE GT&S added, “With the addition of the Clean Canaveral, JAX LNG will be able to significantly increase the deliverability of LNG from our facility to the maritime industry in the southeastern United States.”

“AET has invested in dual-fuel shipping,” said John Lindquist, GAC Bunker Fuels’ Head of LNG Bunkering. “With their support, GAC demonstrates our journey to decarbonization with LNG, upholding our commitment to zero oil-based bunker sales by 1 January 2030 and fulfilling our goals, which are aligned to the UN Sustainable Development Goals (SDGs) and the Getting to Zero Coalition. We thank JAX LNG, Polaris New Energy and its partners for executing a safe operation, while we explore more ways to serve the United States southeast region with the Clean Canaveral.”