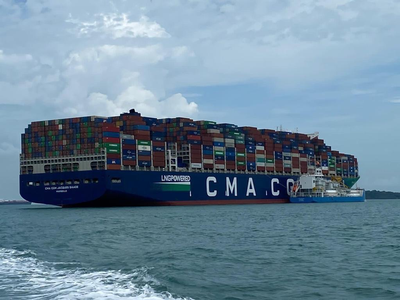 The ultra-large containership (ULCS)—the world's largest powered by by liquefied natural gas (LNG)—departed the port of Singapore on Thursday carrying 21,433 full (20-foot equivalent units (TEU) on board, besting its previous record of 20,723 set in October.

The vessel is currently en-route to Europe on the FAL 1 service, laden with containers of household goods, electronic items, machineries and personal protection equipment.

On the very same voyage, the vessel was also fueled with 6,801 cubic meters of LNG at the port of Singapore for the first time, making the 400-meter CMA CGM Jacques Saade the largest containership to conduct ship-to-ship LNG bunkering in Asia.

Built at CSSC’s shipyard in Shanghai, CMA CGM Jacques Saade is the first in a series of nine LNG-powered sister ships with capacity to hold 23,000 TEU. The vessels were ordered by CMA CGM in 2017. The group’s fleet of LNG containerships will grow to 32 by the end of 2022.