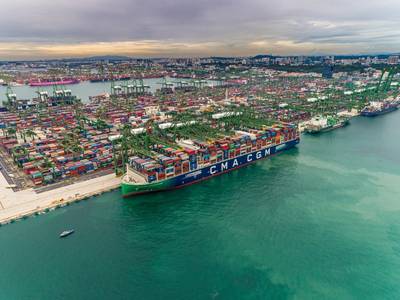 On her Monday departure from Singapore, the CMA CGM Group’s new flagship was carrying a record 20,723 full containers, according to French shipping company CMA CGM.

After joining CMA CGM’s fleet in September, the new record-breaking containership is now on her maiden voyage on the CMA CGM Group’s French Asia Line (FAL 1), connecting Asia with Europe. Its rotation will lead it to the ports of Pusan in South Korea; Tianjin, Ningbo, Shanghai and Yantian, China; Singapore; Southampton, Dunkirk, Hamburg, Rotterdam, Algeciras in Europe; and Port Kelang in Malaysia. This line provides a weekly service comprising 13 calls over the course of 84 days.

Built at CSSC’s shipyard in Shanghai, CMA CGM Jacques Saade is the first in a series of nine LNG-powered sister ships with capacity to hold 23,000 containers (twenty-foot equivalent units, or TEU). The vessels were ordered by CMA CGM in 2017.

In addition to the LNG-burning engines, the nine ultra-large (400 meters long and 61 meters wide) box ships feature a redesigned straight bow with an integrated bulb, a redesigned rudder, and a redesigned propeller all of which substantially improve the vessels hydrodynamics, thereby reducing energy consumption.