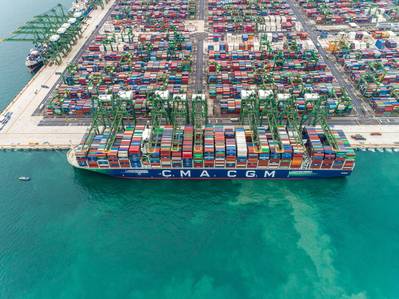 Container shipping line CMA CGM is to expand its fleet of natural gas-powered vessels to cover the busy trans-Pacific route between China and the United States as part of a push to use the fuel to reduce pollution, the group said on Thursday.

CMA CGM will deploy by next year six chartered ships with a capacity of 15,000 20-foot equivalent units (TEU) each on its China-Los Angeles service, representing the largest liquefied natural gas (LNG) fueled vessels to call in the United States, it said in a statement.

The deployment will bring to 32 the number of LNG-powered ships in CMA CGM’s fleet and add to its use of the technology in giant container vessels between Asia and Europe and on smaller ships within Europe.

It also emits less carbon dioxide than traditional diesel, though the benefits are more limited and the shipping industry is looking at other solutions like hydrogen to meet United Nations targets to reduce greenhouse gas emissions.