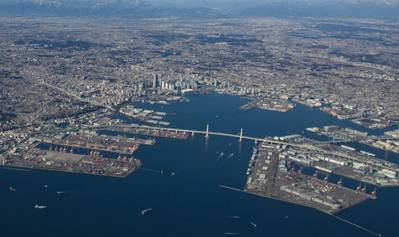 Representing the Japanese ports of Yokohama and Kawasaki, YKIP brings essential knowledge from a port’s perspective to SEA\LNG, which is working collaboratively with key players across the entire LNG value chain.

SEA\LNG and its member organizations continue to advocate for the need to collaborate, demonstrate, and communicate on key areas such as safety, regulation, emissions, and the economic case, to provide the confidence and demand required for an effective and efficient global marine LNG value chain by 2020.
SEA\LNG chairman and executive vice president of TOTE Inc., Peter Keller said: “Ports around the world are taking LNG seriously. As customers begin to adopt LNG as a viable, scalable solution, ports are recognising that it’s an essential part of a strong future fuel offering. Representing the ports of Yokohama and Kawasaki, YKIP is well placed to share its learnings in relation to infrastructure development, effective port operations, and customer needs, and we know that the coalition will benefit from its perspective on unlocking the potential for LNG as a marine fuel. We welcome YKIP under the leadership of Masamichi Morooka.”
Designated by Japan’s Ministry of Land, Infrastructure, Transport and Tourism (MLIT) as the official operating company for the Keihin ports serving Yokohama and Kawasaki, YKIP is tasked with the management of integrated operations at container terminals in the Yokohama and Kawasaki area. As such, YKIP is committed to strengthening the international competitiveness of the Yokohama and Kawasaki ports, performing a central role in the effort to restore the prominence of Japan’s seaports. Japan is the world’s biggest importer of LNG, with 35 regasification terminals. In 2016, it accounted for about 34% of global imports, representing some 86 million tonnes of LNG. As such, Japan, is well placed in terms of both infrastructure and supply to become a major LNG bunkering ‘hub’.
Mr. Masamichi Morooka, President and CEO of Yokohama-Kawasaki International Port Corporation said: “From a geographical perspective, the ports of Yokohama and Kawasaki are perfectly placed to serve as the first or last bunkering points on the Asian side of the Trans-Pacific route. Since August 2015, the port of Yokohama has accommodated an LNG-fuelled tugboat, NYK-owned Sakigake, which has provided us with LNG bunkering experience and enabled YKIP to develop its understanding of technical improvements and safety management. Working with the SEA\LNG coalition, we aim to play our part in encouraging adoption of LNG across the globe and increase awareness of the advantages for ports.”
LNG far exceeds alternative options in terms of emissions reductions. It emits zero sulphur oxides (SOx) and virtually zero particulate matter (PM).
Compared to existing heavy marine fuel oils, LNG can emit 90% less nitrogen oxides (NOx) and through the use of best practices and appropriate technologies to minimize methane leakage, offers the potential for up to a 25% reduction in GHGs.
YKIP is the second Japanese organization to join the SEA\LNG coalition in a matter of weeks, following the recently announced addition of Marubeni Corporation. This takes the latest membership tally to 26 and highlights the industry’s growing recognition of LNG as a cost effective, safe, and more environmentally friendly long-term fuelling solution.

Kalmar, the provider of cargo-handling solutions and services to ports and terminals, has concluded a comprehensive software…