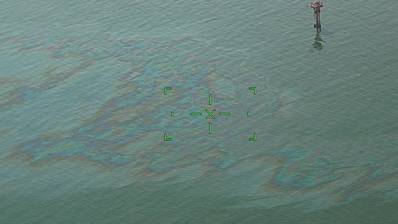 Following reports of oil spills found along the Southeast Louisiana coast in the aftermath of Hurricane Ida, the U.S. Coast Guard said Monday it had conducted overflights Sunday that focused on two locations previously identified for further investigation.

"Members of the National Strike Force aboard a Coast Guard HC-144 flew over Bay Marchand, south of Port Fourchon, Louisiana, and the Enterprise Offshore Drilling rig in the Gulf of Mexico, in a continued effort to track and monitor any threats they may pose to the environment," the U.S. Coast Guard said.

Coast Guard said its crews had observed no active discharge at the Bay Marchand site or near the Enterprise site.

"During the flight, it was discovered that a wellhead belonging to S2 Energy was discharging oil approximately five miles away from the Bay Marchand site. The S2 Energy facility reports they have since secured the wellhead and it is no longer discharging oil," Coast Guard said.

"S2 Energy has contracted an Oil Spill Response Organization to boom the area in order to mitigate the spread and collect any recoverable product. The impacted area is approximately 100-yards long by 100-yard wide. Estimates of release are yet to be determined," Coast Guard said.

The Coast Guard said it was prioritizing nearly 350 reported incidents for further investigation by state, local, and federal authorities in the aftermath of Hurricane Ida.

Oil held above $75 a barrel on Thursday, within sight of a multi-week high hit a day earlier, supported by a big drop in U.S.