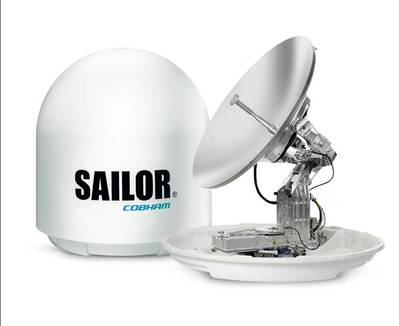 The SAILOR 1000 XTR Ku is the first of a new generation of software-controlled antenna systems in the Cobham SATCOM new SAILOR XTRTM antenna platform line.

SAILOR XTRTM integrates SAILOR VSAT technology into a new platform with new software and electronic capabilities that prepare it to operate in future satellite constellations in LEO, MEO, GEO and HEO orbits. The one-meter antenna has a new simplified and robust pedestal for better antenna performance and easier and simpler conversion between Ku- and Ka-bands.

A new Ethernet port inside of every above-deck SAILOR XTRTM unit facilitates new connectivity options. Solution Partners could use this to integrate third-party devices such as cellular transceivers and Wi-Fi access points. The additional data from these devices gets securely routed at up to 1 Gbps to an Ethernet port on the SAILOR XTRTM Below Deck Unit. The antenna also comes with a new XTR Antenna System Control Module (ASCM) with a hardware encryption key chip mounted inside. The XTR ASCM is networked to all other modules and motors via a star network topology for speed of data exchange and reliability. Importantly, it only accepts Cobham-signed software, which makes it impossible for others to read out the private key, which is programmed into the key chip, thus protecting the antenna from potential cyber-attacks.

Additionally, the true one-cable solution on SAILOR XTRTM not only manages Rx, Tx and power over a single coax cable but can also transfer high-speed data from a third-party device which could be mounted inside of the antenna to below-deck. To ensure world-class uptime, the antenna platform also maintains Cobham SATCOM’s Rapid Deployment Technology. This ensures a fast, hassle-free rollout for ship owners and operators, as well as improved and extensive self-diagnostics for optimal performance and reliability.