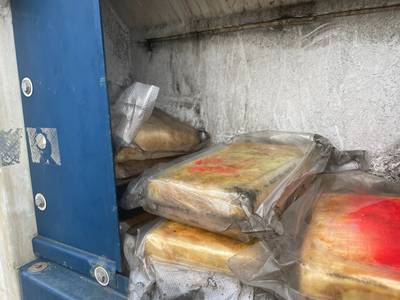 Authorities intercepted a shipment of cocaine from a shipping container at Bell Bay near Georgetown, Tasmania on March 16.

Tasmania Police and Australian Border Force (ABF) are working to identify the source of the 15-kilogram cocaine seizure, which was found in a refrigerated container originating from Sydney, Australia.

A search was conducted in partnership with Tasmania Police detectives from Northern Drug Investigation Services and the Drug Dog Handler Unit. During the search, detectives removed 15 individually wrapped packages that contained a white powdered substance, which was tested and confirmed to be cocaine. The haul is said to have street value of $6 million (AUD).

Other shipping containers were searched with no further product being located.

Investigations into the origins and movements of the shipping container are continuing with the ABF and Australian Federal Police assisting Tasmania. At this stage no charges in relation to the matter have been laid.

Detective Inspector Craig Fox said, “This seizure of a significant amount of cocaine should send a strong message to criminals involved in importing drugs into our state.

“Tasmania Police is committed to preventing the importation and distribution of illicit substances in our state. We work closely with our partners to ensure our air, sea and mail corridors are not exploited by those wanting to profit from drug distribution. We thank these partners for their ongoing support.”

ABF Acting Superintendent Allister Keel said the detection highlighted the ongoing threat of illegal drug importation, including the role that trusted insiders can play in enabling this criminal behavior.

“The ABF, working closely with Tasmania Police and other law enforcement partners, is committed to combatting the scourge of illegal drug importation, and the harm this activity causes to the Australian community,” Acting Superintendent Keel said.

“This detection highlights the ongoing threat of illegal drug importation, including the role that corrupted individuals, working within our international supply chain, can play in enabling this criminal behavior, and what can be achieved when law enforcement partners with industry to deter criminality.

“To this end, the ABF has established Operation Jardena, aimed at making the Australian supply chain a hostile environment for criminal activities. The operation has 130 officers working across the nation dedicated to supply chain operations, working hand in glove with partner law enforcement and regulatory agencies.”