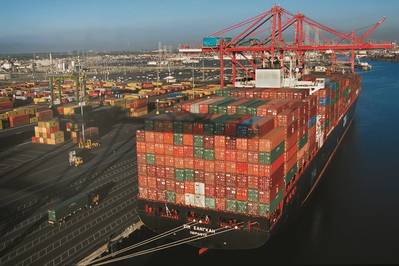 Executives from the ports of Long Beach and Los Angeles held a kickoff meeting earlier this week to begin working together to focus on cargo conveyance strategies that will enhance velocity and efficiency throughout their gateway’s supply chain.
In their first meeting under the formal discussion agreement recently approved by the Federal Maritime Commission, ranking staff of the two San Pedro Bay ports — the busiest seaport complex in the United States — agreed that the primary goal of the collaboration is to get cargo moving more efficiently.
The initial meeting, held at Port of Long Beach headquarters, set the stage to discuss a framework for how the ports will cooperate, work with stakeholders from throughout the supply chain and communicate the results of the efforts.
At the end of February, the Federal Maritime Commission agreed to allow the two ports to cooperate far more strategically on finding new ways to prevent congestion and cargo delays, improve the transportation network and enhance air quality. The decision came after several months of severe congestion and shipment delays caused by a number of factors.
“Through this working group, we will engage with our stakeholders to discuss issues and develop solutions for optimizing cargo flow through our ports,” said Port of Los Angeles Executive Director Gene Seroka. “Our ports, customers, labor force and supply chain partners are committed to taking this gateway to a new and higher level of performance, and we’ll accomplish this by working together.”
“Our shared goal is to optimize the performance of the trans-Pacific supply chain,” said Port of Long Beach Chief Executive Officer Jon Slangerup. “The San Pedro Bay has always been the fastest route between Asia and the U.S. and I’m confident we will find ways to significantly increase the velocity of goods movement and overall efficiency of our end-to-end system, thereby reinforcing our gateway as the No. 1 choice for shipments to and from Asia.”
The ports will discuss innovative approaches to improving the efficiency of marine terminal, trucking, rail and vessel operations. The ports also plan to discuss legislative advocacy, security enhancements, infrastructure, technology and environmental improvements related to supply chain optimization.
The deployment of larger ships, coupled with a new level of vessel-sharing dynamics created by carrier alliances, have created congestion issues at many large ports, but the problems have been especially severe at the San Pedro Bay ports due to the higher volumes of intermodal cargo that flow through the gateway.
The Port of Los Angeles and Port of Long Beach are the two largest ports in the nation, first and second respectively, and combined are the ninth-largest port complex in the world. The two ports handle approximately 40 percent of the nation’s total containerized import traffic and 25 percent of its total exports. Trade that flows through the San Pedro Bay ports complex generates more than 3 million jobs nationwide.