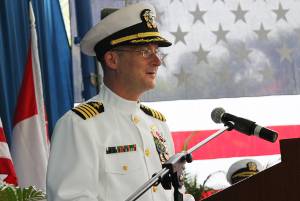 SEALOGFE, whose mission is to safely and efficiently operate MSC-controlled ships to provide services in support of U.S. Pacific Command and U.S. 7th Fleet, has up to 48 Naval Fleet Auxiliary Force, Special Mission, Prepositioning and Strategic Sealift ships in its vast area of responsibility encompassing more than 52 million square miles of the Pacific and Indian Oceans.

During the ceremony, Navy Rear Adm. Mark Buzby, commander of Military Sealift Command, presented Romano with the Legion of Merit Medal recognizing his achievements over the past two years.

“The contents of this award recognize the hard work and success of my staff, not only me,” Romano told the audience of more than a hundred guests. Romano, who reported as SEALOGFE’s commander in March of 2008, is SEALOGFE’s second commander since the command moved to Singapore from Yokohama, Japan, in 2006.  SEALOGFE is co-located with Commander, Logistics Group Western Pacific and Commander, Task Force 73.

Denman is a 1985 graduate of the U.S. Naval Academy and earned a master’s degree in strategy from the Army’s Command and General Staff College in 1996. He has also completed Joint Professional Military Education Phases I and II.

“One doesn’t earn command through seniority, but through a proven record of excellence,” said the ceremony’s guest speaker, Logistics Group Western Pacific commander Navy Rear Adm. Nora Tyson. “That is certainly the case of our incoming commodore, Capt. Chip Denman. You have a great team, and I have every confidence that you will continue to build upon the superb foundation Jim has left for you.”