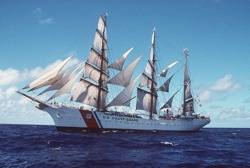 The Eagle is the largest tall ship flying the United States flag and the only active square-rigger in U.S. government service. A three-masted barque, the Eagle provides an unparalleled at-sea leadership and professional development experience for future officers of the U.S. Coast Guard. A permanent crew of six officers and 49 enlisted personnel guides the trainees through a rigorous underway and in-port training curriculum dedicated to the skills of navigation, damage control, watchstanding, engineering and deck seamanship.

“It is an honor to participate in commemorating the War of 1812 with the United States Navy and other international tall ships,” said Capt. Eric C. Jones, the Eagle’s commanding officer. “The Eagle’s 2012 schedule provides challenging at-sea opportunities for training future Coast Guard officers, while also building an appreciation for our nation’s rich maritime heritage through our participation in Operation Sail 2012 and War of 1812 commemoration events.”