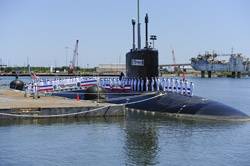 The Navy's newest addition to the submarine force was commissioned June 2, in its namesake state.

More than 7,500 people braved the typical tropical Mississippi weather to witness the ceremony in Pascagoula, while others viewed it live on the Internet.

Secretary of the Navy, Ray Mabus, a native Mississippian and former governor of the state was the ceremony's keynote speaker. He enthusiastically welcomed Mississippi to the fleet.

"I am so glad to be home to commission the wonderfully named Mississippi", said Mabus. "When you look at Mississippi you know that American exceptionalism, to paraphrase Mississippian William Faulkner, will not only survive, it will prevail.

Also on hand for the commissioning was Chief of Naval Operations (CNO) Adm. Jonathan Greenert, who compared the Sailors and ships that served in the Navy during the War of 1812 to the Sailors and Mississippi who serve today.

"We learned during the War of 1812 what we need to make a great Navy," said Greenert. "Along with ships that are well built and resilient, we must have bold and innovative leaders such as Captain McGrath. Most importantly we need crews that are confident and proficient in our craft. This superb crew has been well trained, and they are ready for this magnificent warship."

Noteworthy was the delivery of the submarine to the Navy almost one year early and under budget.

"It took just over 62 months to build Mississippi which sets a record for the Virginia class program and is a testament to the skill and dedication of the shipbuilders," said Mabus.

Mississippi, the most modern and sophisticated attack submarine in the world, can operate in both littoral and deep ocean environments and presents combatant commanders with a broad and unique range of operational capabilities. Even with the technological advantages, it's the crew who sails on Mississippi that make her an invaluable asset.

"The reason we have the edge that we do and the reason that no navy on earth can touch us, is because of the Sailors that represent the United States Navy," said Mabus. "The Sailors standing before you are the best skilled, the highest trained, and most dedicated that the world has ever known."

Continuing the longstanding Navy traditional first order, Mississippi's sponsor Allison Stiller, deputy assistant secretary of the Navy for Ship Programs proclaimed, "Man our ship and bring her to life." For the Navy and for the state of Mississippi, the wait was over.

Mississippi Gov. Phil Bryant said that Mississippi and her Sailors reflect the determination and patriotism of the state.
"This great warship reflects the personality and resilience of all Mississippians," said Bryant. How proud we might be to also know that our state motto "Virtute et armis" will go with it - By Valor and Arms. Let the world know from this moment on Mississippi sails peace through strength."

As the Navy's newest Virginia-class attack submarine, Mississippi is a flexible, multi-mission platform designed to carry out the seven core competencies of the Submarine Force: anti-submarine warfare, anti-surface warfare, delivery of special operations forces, strike warfare, irregular warfare, intelligence, surveillance and reconnaissance and mine warfare. Mississippi will support these capabilities for years to come.

"During the time Mississippi is in the fleet, she may patrol the waters of the North Atlantic to the Western Pacific and under the Arctic ice to work with the Coast Guard and our international partners, and she'll support our carrier strike groups around the world," said Mabus.

The submarine is 377 feet long, has a 34-foot beam, and will be able to dive to depths greater than 800 feet and operate at speeds in excess of 25 knots submerged.

Capt. John McGrath is Mississippi's first commanding officer. McGrath leads a crew of about 140 officers and enlisted personnel. A native of Neptune, N.J., he graduated with distinction from the U.S. Naval Academy in 1990, earning a Bachelor of Science degree in Electrical Engineering.

Virginia-class submarines are built under a unique teaming arrangement between General Dynamics Electric Boat and Huntington Ingalls Industries- Newport News. Construction on Mississippi began in February 2007; the submarine's keel was laid June 9, 2010, and she was christened during a ceremony Dec. 3, 2011.

Mississippi is the fifth Navy ship, and first submarine, to be named in honor of the people of the Magnolia State. The most recent USS Mississippi was a nuclear-powered guided missile cruiser (CGN 40) that was in service from August 1978 to July 1997.