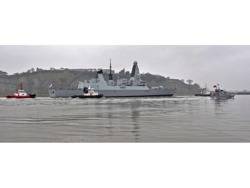 HMS Dragon is the fourth of six Type 45 destroyers being built for the Royal Navy. All will be based in Portsmouth. The first, HMS Daring, was commissioned in July 2009 and the fifth, Defender, is due to arrive in Portsmouth for the first time this summer. All six are scheduled to be in service by the middle of the decade.

Hundreds of guests including families of the 190-strong ship's company attended a colourful 'christening' ceremony at Portsmouth Naval Base which marked the ship's transition into front line service.

Reflecting her strong Welsh connections - the ship is affiliated to the city of Cardiff, among the principal guests was the Secretary of State for Wales, Cheryl Gillan.

Commander Darren Houston, Dragon's Commanding Officer, said the event was a proud moment for all on board: "This very special day marks the end of our trials phase and the transition to front line service. Thereafter the emphasis will be on combat readiness in preparation for our first deployment next year. I am very pleased that so many families, friends and affiliates were part of our momentous day."

The ceremony was rounded off in traditional Royal Navy fashion with the cutting of a commissioning cake. Performing the honour were the Commanding Officer's wife, Liesl, and Engineering Technician Mark Soldiew, aged 18, the youngest member of the ship's company.