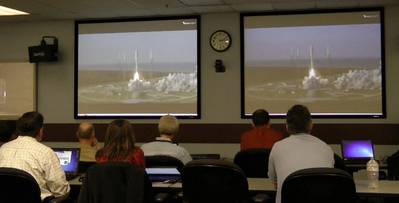 U.S. Navy military and civilian engineers are preparing the latest military communications satellite for a planned Jan. 20 launch from Cape Canaveral Air Force Station, Florida.
The satellite is part of MUOS, or Mobile User Objective System, which operates like a smartphone network from space, vastly improving secure satellite communications for mobile U.S. forces. Unlike its predecessor system, MUOS provides users a global, on-demand, beyond-line-of-sight capability to transmit and receive high-quality voice and mission data from a high-speed Internet Protocol-based system.
This third of five MUOS satellites was encapsulated into its payload fairing Dec. 19, representing one of the final steps in preparation for its upcoming launch. The payload fairing protects the satellite from forces during the early stages of its journey.
"This third MUOS launch is another major step toward achieving a fully operational MUOS end-to-end capability by 2016," said Navy Capt. Joseph Kan, the MUOS program manager. "The Navy, in close collaboration with the Army, Air Force and our industry partners, is bringing the future of worldwide mobile satellite communications into reality for the United States and potentially allied nations."
The Navy plays a key role in national space efforts by providing narrowband satellite communications for the DoD and other government agencies. While MUOS was designed for mobile users who require worldwide, secure voice and mission data at higher data rates, services are also available for ships, aircraft and vehicles.
MUOS is more than just a five-satellite constellation. It additionally comprises four ground stations across the globe, complex software to manage the network and a Wideband Code Division Multiple Access waveform that serves as an interface for end-user radios.
Two MUOS satellites, launched in 2012 and 2013, are already providing legacy communications capability from their geosynchronous orbit locations 22,000 miles above Earth. Ultimately, the satellite constellation and associated network will extend narrowband communications availability well past 2025.
The Navy's Program Executive Office for Space Systems, located at the Space and Naval Warfare Systems Command in San Diego, is responsible for the MUOS program.