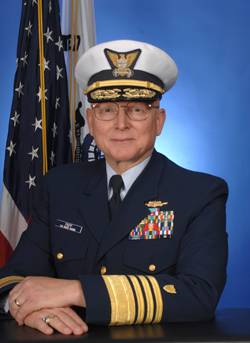 December marked the 10th anniversary of the U.S. Coast Guard’s formal entry into the national intelligence community, although many had long perceived the Coast Guard as a de facto member.

The Coast Guard began its long involvement with the work of intelligence in 1790. Tariffs imposed on goods imported to the United States, in order to raise revenue, caused lawless merchants to unload their cargoes at isolated locations to avoid paying the tariffs at customs houses in ports. Identifying this as a threat within the new nation’s maritime domain, Secretary of the Treasury Alexander Hamilton requested and received 10 revenue cutters to patrol the coast to identify smugglers and ensure tariffs were paid.

Modern intelligence operations began developing as a discrete service in the Coast Guard around 1915. By the time Prohibition became the law of the land, the Coast Guard had developed into an effective force against the smuggling of liquor and narcotics. This caused crime syndicates to use clandestine radio stations to communicate between their smuggling vessels and land-based operations. Coast Guard intelligence forces broke the smugglers’ codes, enabling the service to battle the smugglers and break up criminal syndicates. A Coast Guard intelligence unit was established in Boston in 1934 and in 1936 an Intelligence Division was created at Coast Guard Headquarters, Washington, D.C., both a result of the service’s successes.

The Coast Guard continued its efforts against narcotics smuggling in the decades following the war.  The 1980 Mariel Boatlift, the mass exodus of Cuban migrants from their island nation to the U.S., reinforced the need for intelligence capabilities to further develop and become more structured. Federal officials realized the nature of many threats facing the United States were seaborne and the Coast Guard, with its unique capabilities and intelligence work, was seen as the agency that had much to offer against those threats.

“Intelligence is a force multiplier and a hedge against risk,” said Rear Adm. Thomas F. Atkin, assistant commandant for Intelligence and Criminal Investigations. “Intelligence support is at the heart of the Coast Guard motto: Semper Paratus [Always Ready]. We work to create decision advantage to protect and advance U.S. interests. We accomplish this by conducting intelligence operations and activities to provide timely, relevant and actionable intelligence to shape operations, planning and decision-making. In a time of dwindling resources, it’s important to have appropriate levels of intelligence to identify and warn against the next threat on the horizon.”

Formal inclusion in the intelligence community has resulted in additional authorities and resources for the Coast Guard, enabling the agency to expand its capabilities to include a cryptology program (codebreaking) and a counterintelligence service.  The counterintelligence service helps preserve the operational integrity of the Coast Guard by shielding it from the intelligence activities of foreign powers, terrorist groups, and criminal organizations.
Coast Guard Intelligence applies its capabilities to all Coast Guard mission sets and has provided support for major operations including the response to the 2010 earthquake in Haiti. Intelligence personnel provided the earliest port infrastructure damage reports, which supported multi-national efforts to provide relief and port recovery. Coast Guard Intelligence also produced threat assessments and briefings that supported force protection decisions and other national and interagency operational decisions.

In addition to numerous drug and human smuggling cases, Coast Guard Intelligence has provided critical support to Coast Guard commanders wrestling with non-traditional intelligence needs, such as the interdiction of the Bangun Perkasa fishing vessel and its use of illegal driftnets.

“Coast Guard intelligence provides operational commanders with the understanding they need to make decisions on how best to deploy assets and conduct operations,” said Adm. Bob Papp, commandant of the Coast Guard.
The Coast Guard’s persistent presence in the maritime domain, due to its diverse mission sets and broad legal authorities, fills a unique niche within the intelligence community. As a member of the armed forces, the Coast Guard is at the intersection between homeland security and national defense. As a federal law enforcement agency and national intelligence community member, the Coast Guard is also positioned as a bridge between these two important groups. Because of the service’s unique access, emphasis and expertise in the maritime domain – an area where other U.S. government agencies typically are not present – it collects and reports intelligence that supports its own missions as well as national security objectives. -by Lisa Novak