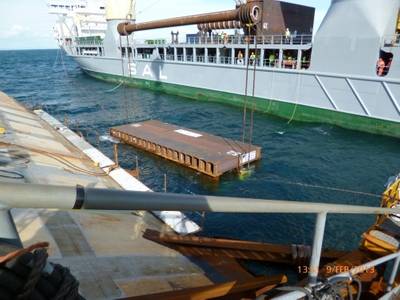 At the periodic meeting of the 'Observatory' with the Giglio community, president Maria Sargentini, accompanied by Costa Crociere managers, Rome La Sapienza University researchers and Titan/Micoperi Consortium experts, updated the local population on recovery operations and described the progress being made on the characterisation of water inside the wreck.

During the meeting, it was announced that the first sub-sea platform has already been installed and that the positioning of the second will be completed tomorrow.  All the activities planned are proceeding without respite: the remaining sea bottom platforms have been completed at the yards of Rosetti and Cimolai, ready for transportation to Giglio and installation; 35% of the special cement mattresses have been positioned and filled, while the first 15 flotation caissons produced by Fincantieri are ready and will soon reach the Consortium’s logistics base. In parallel, onshore work is almost complete to position the remaining 8 retention system anchor blocks.

The testing of water samples began last Novermber, and so far none of the tests performed by ARPAT has revealed any clear alterations of the water outside the wreck, which continues to be be particularly clean, as is the case all around Giglio.  In consideration of the limited water flow between the inside and outside of the wreck, the situation does not raise any particular worries for the marine environment and makes the planning of counter measures possible.

However, the Observatory confirms the need to continue constant monitoring operations, also involving further sampling cycles. By the end of February, a simulation model will be ready to predict the diffusion dynamics of the water released during the rotation phase, in order to assess possible action to manage and minimise any potential negative impact on the marine environment.