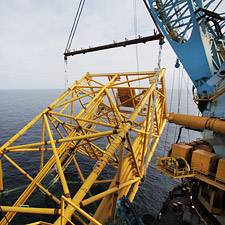 The steel support structure for the Gudrun platform is now in place on the North Sea field, completing the first phase of the extensive installation work being carried out there.

”The entire operation has been carried out according to plan and in a secure manner,” reports Anders Opedal, senior vice president for projects in Statoil’s Technology, Projects and Drilling business area. “We’ve passed an important milestone for coming on stream at the right time and to budget. With the jacket solidly positioned on the seabed, we’ll be able to start drilling in the fourth quarter as planned.”

Installation of the steel structure began on July 24, and the job of attaching it to the seabed was completed on August 2, when the last of 12 60-meter piles was driven home.

Saipem 7000, the world’s second-largest crane vessel, has been used to carry out the installation work on Gudrun.

Weighing some 7,000 tons, the traditional jacket comprises two main structures of almost 2,300 tons each, tied together by six horizontal frames and various bracings.

“Gudrun is the first of a number of new installations in an area of the Norwegian North Sea which is both highly interesting and mature,” observes Ivar Aasheim, senior vice president for field development in the Development and Production Norway business area. “By exploiting existing infrastructure for processing and transport, we’re ensuring production from new fields. Gudrun will also make an important contribution to maintaining high production levels going forward.”

The next development milestone is the start of pre-drilling production wells on the field. These will be tied back to the platform for partial processing and oil and gas export. Final processing of Gudrun’s output will take place on Sleipner A, with the gas piped to the adjacent Sleipner T platform for carbon dioxide removal. In addition, electricity to operate the Gudrun installation once it comes on stream in two years’ time will be supplied from Sleipner A.