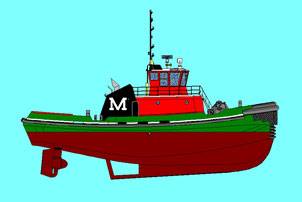 On January 4, 2011, Washburn & Doughty Associates, Inc. of East Boothbay, Maine began construction of a 93-ft by 38-ft, 6,000 hp Z-Drive tug for Moran Towing Corporation of New Canaan, Conn. Washburn & Doughty is building the vessel to its newest in-house design based upon the yard’s previous 92-ft by 32-ft design, of which there are 22 tugs in operation. The increased length and beam will allow for increased horsepower while maintaining the maneuvering characteristics and handling capabilities.

The tug will be powered by two MTU M63L16 cylinder series 4,000 main engines each rated at 3,000 bhp at 1,800 rpm. The propulsion units will be Schottel model SRP 1515 FP drives, equipped with stainless steel propellers measuring 2,600 mm and nozzles lined with stainless steel. Bollard pull is anticipated to be 70 mT ahead and 66 mT astern.

The tug will feature a machinery alarm system assembled by First Electric Motor Services and built from Siemens components.

The vessel will be equipped with a Markey DEPC-48 electric hawser winch forward and a Markey CEWC-60 electric hawser capstan aft. Bow fendering will be two courses of cylindrical fender up high along with soft loop and wing type sub fender below. A course of D-fendering, measuring 12 by 14 inches, will be fitted at the main deck extending from the bow fenders at the sides and around the stern.

It is anticipated that the electronics package will include two VHF radios, one loud hailer, two radars, one depth sounder, two DGPS, one AIS, one Sim-Motion System, one Blue Box System with five cameras, one Furuno RD-30 Weather Station and one satellite compass.

Accommodations will be provided for seven crew members. It is anticipated that Oakledge Carpentry of Harpswell, Maine will complete the joiner work.

Washburn & Doughty is also currently building two Z-Tech 7500 Class Terminal/Escort Tugs. Construction at the shipyard takes place in a new, state-of-the-art building that can accommodate vessels up to 200 ft by 50 ft.