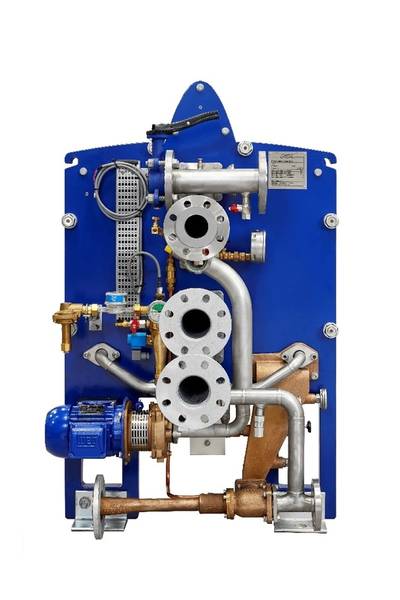 When it was introduced in 2008, Alfa Laval’s AQUA freshwater generation technology cut seawater needs and pump-related power consumption in half. With today’s AQUA Blue S-type, the need for electrical power is further reduced – to just one-third that of conventional freshwater generators.

The new AQUA Blue S-type uses the same three-in-one AQUA plate technology as the original C-type configuration. But it maximizes energy efficiency and capacity-to-footprint ratio by making use of the vessel’s existing seawater cooling system pumps. According to the manufacturer, this cuts electrical power needs by 70 percent compared to conventional freshwater generators, and it shrinks the already small AQUA Blue footprint by up to 15 percent.
Besides its smaller footprint, the AQUA Blue S-type offers shipyards a considerable amount of new flexibility, including a range of connection alternatives. Because it makes use of the vessel’s seawater cooling system pumps, it employs a smaller ejector and a smaller, separately installed ejector pump. Likewise, the pipework can be both shorter and smaller in diameter.
In addition, the S-type handles a wider span of pressures, which means the configuration can be adapted to the highest or lowest water level. An adapted configuration is able to deal with higher pressure in the overboard line, which allows the freshwater generator to be placed more freely on board.
Having the choice between an S-type or C-type configuration of AQUA Blue ensures an ideal match for ship owner and shipyard priorities. The AQUA Blue C-type, which has a combined cooling water and ejector flow, has a single seawater connection to the vessel’s sea chest. This makes it independent of other equipment and conditions in the vessel’s seawater cooling system.