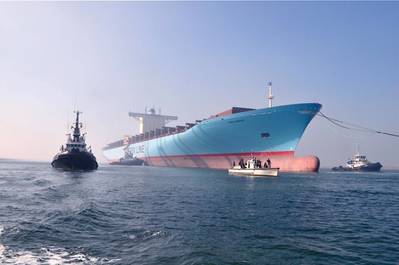 The disabled 'Emma Maersk' starts the long tow from Suez to Europe for repairs to hull damage in vicinity of a stern thruster unit.

Palle Laursen, Maersk Line’s Head of Ship Management in Copenhagen, says, “We are delighted that Emma is on the route back towards full service. However, this only the beginning of a long journey – once she gets to the repair facility it will still be several months before repairs are completed.”   He adds: “The efforts of the crew, the local Maersk Line, SCCT, and Svitzer organisations and the underwater repair teams should be fully recognised in enabling this. We also appreciate the full support of the Suez Canal Authority in making this happen so quickly.”

Background
On 1 February 2013, Emma Maersk, currently Maersk Line’s largest container vessel, experienced an ingress of water into the engine room. She had just commenced her southbound transit through the Suez Canal en route to Asia. The captain decided to terminate the planned voyage and go alongside the nearby Suez Canal Container Terminal (SCCT). Whilst the exact cause of the incident is still being investigated, it has been confirmed that the water came in through a breach in the stern thruster tunnel.

According to Captain Marius Gardastovu, there was never any real danger or panic at any point. “Of course it is a shocking experience when you look back and consider what could have happened,” he says. “But given the circumstances, everything was handled as well as possible because of a close-knit crew who knew exactly what to do.”   She was loaded with containers equivalent to 13,537 TEU of which 6,425 were full.

Maersk Line is able to reorganise its fleet without chartering replacement tonnage. The 9,660 TEU 48Y-Butterfly will replace Emma Maersk on the AE10 Asia-Europe service until she is ready to re-enter service.