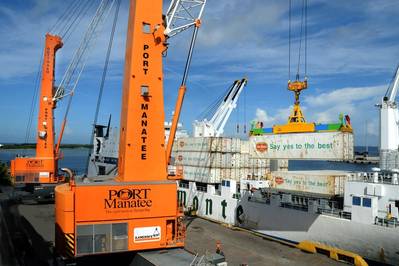 Port Manatee’s growth as a cargo gateway continues, with the Florida Gulf port reporting a 36 percent year-over-year increase in containerized cargo handled in the first half of its fiscal year.

The favorable results for the first half of the port’s 2016 fiscal year come on the heels of a phenomenal 83 percent rise in TEUs handled in the fiscal year ended Sept. 30, 2015, compared with the preceding fiscal year.

In the six-month period from Oct. 1, 2015, through March 31, 2016, Port Manatee handled 3,310,873 tons of cargo, up 5.7 percent from 3,132,705 tons in the comparable year-earlier fiscal half. The increase was propelled by the handling of additional project cargos and substantial gains in the liquid bulk sector, including diesel, gasoline, ethanol and asphalt. The primary contributing factor was the fuel supply agreement inked in late 2015 with RaceTrac Petroleum Inc.