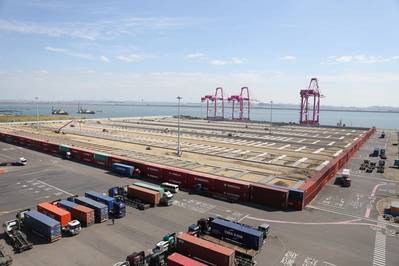 Starship Pegasus (1,800 TEU) provided for the TVX entered the Incheon New Port SNCT early in the morning on August 16 for the first time.
Starship Pegasus is one of the three ships operated for the TVX. The three ships (1,800 TEU) will be operated by Namsung Shipping, Dongjin Shipping and Pan Continental Shipping for 9 months. After that, they would be operated by Pan Ocean and CK Line for another 9 months.
The TVX route is Incheon-Gwangyang-Busan-Ho Chi Minh-Laem Chabang-Bangkok-Laem Chabang-Ho Chi Minh-Incheon. It will be operated weekly.
The route is identical with the existing NTX route (Incheon-Pyeongtaek-Gwangyang-Busan-Ho Chi Minh-Laem Chabang-Bangkok-Laem Chabang-Ho Chi Minh-Incheon). However, the difference is that the NTX enters the Port of Incheon on weekend while the TVX arrives in the port during weekdays. As demand for Thailand/Vietnam increases among the shippers in the capital region, a dense service network has been established.
The IPA also explained that since the TVX is operated by five shipping companies, it can reduce operating costs and add a new shipping route.
Kim Yeong-guk, IPA Global Marketing Team Manager, said “We are going to make our best efforts to provide the container services of the Port of Incheon including the new service in a secure and stable fashion”.
Meanwhile, the Port of Incheon now has 48 regular lines including the new TVX route. The Southeast Asia line calls to the Port of Incheon 27 times a week with a total of 27 routes.