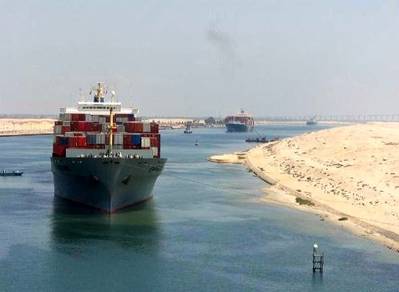 Egypt has ordered an investigation into an accident in which a Kuwaiti container ship and a fishing vessel collided in the Red Sea in an incident that killed 13 Egyptians.
A statement from the prosecutor's office said initial enquiries showed the fishing boat capsized after it and the Kuwaiti ship hit each other after the latter has passed through the Suez Canal.
The collision is at least the second such recent incident involving vessels passing through the Suez Canal. In September, two container ships collided at the northern end of the canal, knocking containers into the sea and delaying traffic in both directions.
The Suez Canal is one of the world's most strategic waterways, facilitating maritime trade between Europe and Asia.
It provides about $5 billion in annual revenue for Egypt, which is currently digging an extension to allow larger ships to pass through the channel at the same time.
The prosecutor did not name the ship or the company operating it, but judicial sources said it was Kuwaiti-owned and Panamanian-flagged. It was sailing from Italy to Saudi Arabia, the sources said.
Kuwaiti officials were not immediately available for comment.
The Egyptian military said in a statement that the Kuwaiti ship was docked in Safaga port, 500 km (300 miles) southeast of Cairo, while investigations continue.
(Reporting By Stephen Kalin; Editing by Angus MacSwan)