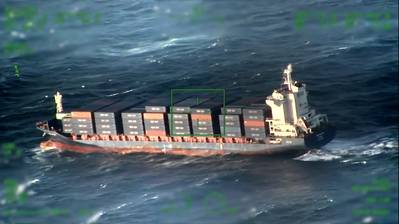 A Singapore-flagged containership went adrift after losing engine power off the coast of California, the U.S. Coast Guard said.

The crew of the 564-foot Wan Hai 176 told Coast Guard Sector San Francisco watchstanders that the ship started drifting as the result of mechanical problems on Friday. The ship has 21 people on board, and no injuries have been reported.

The Coast Guard, California Department of Fish and Wildlife Office of Spill Prevention and Response and Marin County established a unified command to continue its response to the ship located approximately seven miles off the coast of Point Reyes, Calif.

The Wan Hai 176 remained stable at anchor overnight while tugs transited to the ship’s location. The tugs Stacey Foss, Delta Deanna and Delta Billie are on scene to assist. Due to rough weather the towing vessels have been unable to deploy lines to tow the ship.

The Wan Hai 176 is carrying miscellaneous materials in 783 containers and has no reported hazardous materials.