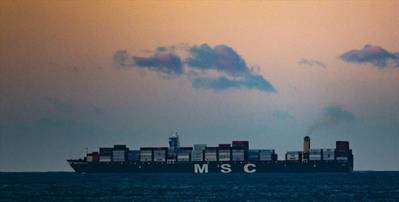 The survivors are 10 adult men and a male minor, who were rescued by the 984-foot Panamanian flagged MSC Gisselle after their inflatable boat took on water and capsized in the Mona Passage between the Dominican Republic and Puerto Rico.

The box ship's crew informed watchstanders at U.S. Coast Guard Sector San Juan at 8:20 p.m. Saturday that the vessel was on scene near the capsized boat and people in the water.

The Coast Guard diverted a San Juan-stationed 154-foot fast response cutter Donald Horsley and a HC-144 Ocean Sentry aircraft to the scene. Shortly thereafter, the MSC Giselle relayed the crew was able to rescue all persons from the capsized vessel. Upon arriving on scene, the crew of the cutter Donald Horsley embarked and rendered assistance to the migrants, giving food, water, shelter and basic medical attention.

The Coast Guard then repatriated the 11 migrant survivors to the Dominican Republic between Monday and Tuesday.

"Illegal migrant voyages are exceedingly dangerous, and these 11 individuals are very fortunate to be alive thanks to the master and crew of the MSC Giselle," said Lt. Charles Chavtur, commanding officer of the Donald Horsley. "I'm glad we were able to arrive quickly, assist the survivors and ensure their safe return to the Dominican Republic."

"To anyone considering taking part in an illegal migrant voyage across the Mona Passage, don't take to the sea, you are putting your life and the life of others at risk," said Cmdr. Beau Powers, Sector San Juan chief of response. "These highly dangerous voyages often take place aboard unseaworthy grossly overloaded makeshift boats, which continuously take on water and have little or no lifesaving equipment onboard."