Containership Runs Aground in Chesapeake Bay 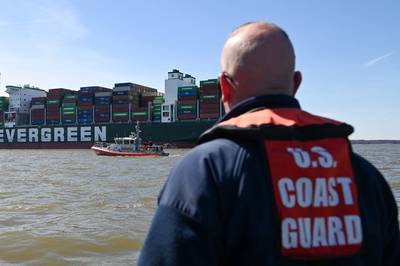 A  1,095-foot containership has run aground in the Chesapeake Bay, near Craighill Channel in Maryland.

The U.S. Coast Guard said it is working with Maryland Department of the Environment to coordinate the refloating of containership Ever Forward, after its watchstanders at Coast Guard Sector Maryland-National Capital Region received the initial report of the grounding at 9 p.m., Sunday. The ship had just left the Port of Baltimore and was en route to Norfolk, Va.

No injuries, pollution or damage to the vessel have been reported.

The Coast Guard has issued a safety marine information broadcast to mariners in the area stating that a safety zone will be in place during salvage operations.

The Ever Forward is not currently obstructing the navigational channel, but vessels operating in the vicinity will be required to conduct one-way traffic and transit at a reduced speed, the Coast Guard said.

The 12,000 TEU Ever Forward was built by South Korea's Samsung Heavy Industries in 2020. It is owned by Taiwanese shipping company Evergreen Marine and registered in Hong Kong.