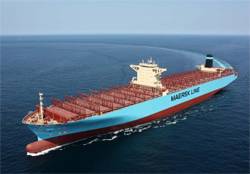 Even for Hyundai Heavy Industries (HHI), the world’s largest shipyard group, it was a remarkable occasion. In a quadruple naming ceremony at HHI’s Ulsan shipyard on July 2, Rickmers Group christened four ultra-large container ships (ULCS) of 13,100 TEU each.

Each of the four ships, Pearl Rickmers, Ruby Rickmers, Aqua Rickmers and Coconee Rickmers, has a service speed of 24.3 knots. They have been chartered longterm to Maersk Line and will join Maersk’s “E-class” as Maersk Edinburgh, Maersk Emden, Maersk Eindhoven and Maersk Essen.

The ships will be delivered one by one during July and August 2010, and phase in to Maersk’s new joint service with CMA CGM linking Asia and North Europe. As Maersk’s AE8 service, it will deploy ten ships of this size, each partner contributing five. The port rotation will be:

A further four sister ships are due for delivery to the Rickmers Group in 2011, also for charter to Maersk Line. All have been fixed for 10-year periods with further options.

Commenting on the day’s events, Mr Rickmers reflected the growing confidence in the container market:

“With volumes out of Asia again starting to rise and rates holding, container lines’ confidence is growing. Given this scenario, the timing of the delivery of these Rickmers Group ships is looking much better than it might have done six to twelve months ago.”

“With two more sister ships coming in January and February 2011, a seventh at the end of May and the eighth and final ship in the series due for delivery in July 2011, we need the global economy to continue this positive trend. We wish our charterers Maersk Line well in their efforts to maintain a stable market. Too often we have seen container rates tumble despite strong volumes. No one needs this to happen again, even the shippers who provide the cargo.”

Describing the vessels, Mr Rickmers added: “The eight vessels are ideally suited for the current market, which is demanding the largest possible ships in order to reduce the cost per container carried. Although built to operate at over 24 knots, the ships are equally capable of slow steaming. This is an important requirement today and in the months and years to come.

“These ships will also be capable of transiting the Panama Canal following completion of ongoing expansion work. Larger locks and dredging will open up an important additional trade lane for so-called New Panamax (NPX) container ships from Asia to the US East Coast.”

Rickmers noted that were it possible to load all 13,100TEU onto a single train, the train would be approximately 100km long. Put another way, the locomotive would arrive in Kiel on the Baltic coast of Germany before the last railcar had left the shipping company’s home city of Hamburg.

All eight ships are being built by Hyundai Heavy Industries’ Ulsan shipyard. The principal dimensions are as follows:

Containers are carried 17-wide below deck and 19-wide on the hatchcovers. The maximum capacity of each ship is 7,074TEU on deck and 6,018TEU below deck, making 13,092TEU in total. Based on a homogeneous container weight of 14 tonnes per TEU, the maximum capacity is approximately 9,080TEU. Reefer plugs are available for 800 x 40ft containers.

Although designed for a service speed of 24.3 knots, the flex-engines still achieve 21.5 knots at 60% of the engine’s normal output but can also slow steam as required under charterers’ current service patterns, generating substantial fuel savings. By having this substantial speed reserve, the ships can increase speed when necessary to maintain schedule integrity, an important factor in a service industry.