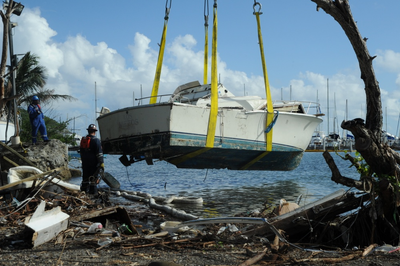 Additionally, the team on Monday removed the last of five vessels targeted for removal in Las Croabas. Saturday, salvage crews used a crane barge to remove a sailboat that was previously  blocking the roadway in north Fajardo.

As of today, response teams have identified 368 impacted vessels, with 166 of those cases closed. Teams have made contact with 199 owners, and responded to 33 pollution reports.

The ESF-10 Puerto Rico is removing damaged vessels, which pose pollution and environmental threats, at no cost or penalty to the vessel owners. Under the direction of the Puerto Rico Department of Natural and Environmental Resources, the goal is to remove each vessel while mitigating public health risk, preserving native habitat, and increasing the Commonwealth’s ability to reconstitute.