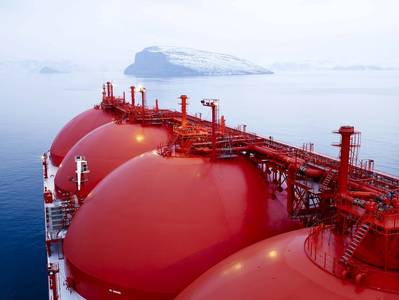 China LNG imports hit record in November, but set to beat that this month.

China's state oil and gas majors are set to import record levels of liquefied natural gas (LNG) this month, betting on robust demand during the cold winter months and helping lift Asian prices to their highest in nearly two years.

Trade flows data on Thomson Reuters Eikon shows 7.33 million cubic metres (mcm) of LNG, equivalent to 3.33 million tonnes, are heading to China for delivery this month. This includes 10 cargoes from Qatar, an unusually high number even for the world's largest LNG exporter.

That would easily top the record 2.66 million tonnes that landed in November, up from 1.81 million a year ago, as a cold snap across the north of the country spurred demand.

The boost in shipments from the Middle East comes as the pace from Australia slows, as a two-week outage at Chevron Corp's giant Gorgon export facility roils trading patterns, likely to the benefit of Qatar.

The trade flow data puts China on track to import more than 20 million tonnes this year, about 13 percent of the country's total annual gas consumption of about 197 bcm, or 152 million tonnes.

The buying spree may give Asian LNG prices <LNG-AS> further upward momentum. They are currently at $9.30 per million British thermal units (mmBtu), the highest since January 2015 and more than double levels in April.

Aside from cold weather, November's bigger-than-expected imports were due to growing use of long-term contracts by oil and gas majors and buoyant manufacturing levels, analysts said.

"A more significant portion of LNG import increases in 2016 have been driven by the national oil companies' contractual ramp ups," said Lee Levkowitz, an LNG analyst with IHS Markit.

PetroChina and other majors have also expanded storage capacity in recent months in anticipation of strong demand for the heating fuel.

But some of these facilities are now nearing capacity, analysts said.

At a news briefing on Wednesday, CNPC said it expects winter-spring natural gas sales to grow by 6 percent to 71.2 bcm.

By Meng Meng and Henning Gloystein