Contract Awarded for Rescue 21 in the Western Rivers 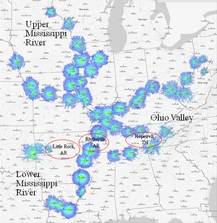 As part of the ongoing National Distress and Response System (NDRS) Modernization Project (Rescue 21), the U.S. Coast Guard competitively awarded a contract August 5, 2013, to Eyak Technology LLC for design, delivery, installation and support of Rescue 21 capabilities in the Western Rivers.

Rescue 21, the Coast Guard’s advanced command, control and communications system, was created to better locate mariners in distress and save lives and property at sea and on navigable waterways. By harnessing state-of-the-market technology, Rescue 21 enables the Coast Guard to execute its search and rescue missions with greater agility and efficiency.

The Western Rivers contract will support critical upgrades necessary to maintain an uninterrupted guard over channel 16, the international calling and distress channel, and provide digitally encrypted communications, Digital Selective Calling (DSC) capability, and a remote site disaster recovery package for over 10,000 nautical miles of navigable rivers within Coast Guard Sectors Ohio Valley, Upper Mississippi River and Lower Mississippi River. Legacy NDRS equipment will be upgraded at the existing 49 remote sites, and three new locations will be added to fill critical coverage gaps near Little Rock, Ark., Blytheville, Ark., and Hopewell, Tenn. The total value of the contract, with all available options, is $22 million.

NDRS is used primarily to support the Coast Guard missions of Search and Rescue and Marine Safety and Security by monitoring and responding to distress calls on channel 16, broadcasting river conditions and other information to mariners on channel 22a, and providing command and control for Coast Guard operations. Rescue 21 capabilities will now allow continuous monitoring of channel 16 while other channels provide both clear and encrypted tactical communications for all Coast Guard operations and interoperability with other agencies.

DSC is a key component of the Coast Guard’s efforts to enhance search and rescue communications on the Western Rivers. DSC uses digital data, rather than voice transmission, to increase the efficiency of maritime communications, the accuracy of data transmitted, and the ability to direct that information to specific units.

Rescue 21 capability is currently operational along the entire Atlantic, Pacific and Gulf coasts of the continental United States, as well as along the shores of the Great Lakes, Hawaii, Puerto Rico, the U.S. Virgin Islands, Guam, and the Northern Marianas Islands, covering nearly 42,000 miles of coastline and has aided in more than 55,000 search and rescue cases nationwide. Under a separate contract, the Coast Guard is also in the process of implementing Rescue 21 capabilities in Alaska.