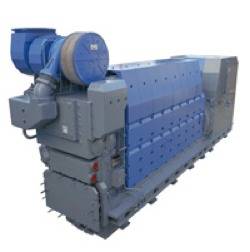 Swire has ordered eight IMT-997 platform supply vessels (PSVs), with four to be built by Universal Shipbuilding Corporation in Japan and a further four to be built by EISA Shipyard in Brazil. Each vessel will be equipped with 4 × 6L27/38 MAN gensets, with each unit rated at 1,980 kW at 720 rpm. All generating sets will be constructed by MAN Diesel & Turbo’s Korean licensee, Doosan Engine Co. Ltd.

The 97-metre, 5,000-dwt PSVs will be approved with DP2 (dynamic positioning) capability and have diesel-electric propulsion systems with azimuth propulsion units. The vessels will be delivered progressively from early 2014 on, with genset delivery accordingly timed to stretch from early 2013 through mid-2014.

Established in 1975, Swire Pacific Offshore (SPO) is an established name in the offshore marine industry, owning and operating more than 75 offshore support vessels, a number it intends to boost to over 100 by the close of 2015.

Headquartered in Singapore, SPO and its subsidiaries have regional offices distributed globally and operate vessels in every major oil-exploration region outside of North America.