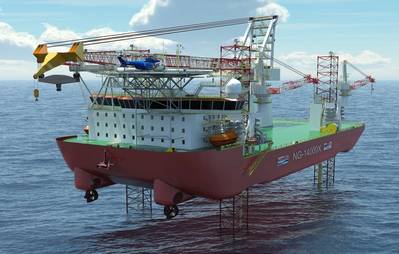 Huisman, a worldwide specialist in lifting, drilling and subsea solutions, has secured a new contract for the delivery of a 1,500mt @ 32m Leg Encircling Crane, reportedly the largest of its kind, for Seajacks new offshore wind farm installation vessel Scylla.

The contract for the 1,500mt crane was awarded to Huisman by the South Korean shipyard Samsung Heavy Industries, who received the order to build the world’s largest and most advanced offshore wind farm installation vessel for Seajacks in early June. Next to the 1,500mt main crane, Huisman will supply two 50mt auxiliary cranes. The cranes will be built at the Huisman production facility in Xiamen, China and delivery is scheduled for Q2 2015.

The main crane can lift 1,500mt at 32m radius and will be installed on top of the starboard-aft jack house which holds one of the 105m long legs of the jack-up vessel. The 110m long parallel crane boom can be stored on top the starboard-forward jack house. This creates a useable deck space in excess of 5,000m2. The crane will be equipped with an anticollision system and parking assistance to avoid damage to the crane boom.

“This is the third Huisman crane ordered by Seajacks which will be used for the installation of wind turbines”, said Gerben Roks, Huisman’s Product and Sales Manager Cranes. Previously, Huisman delivered 300mt pedestal mounted cranes for Seajack’s Kraken and Leviathan.

The Scylla, based on the Gusto MSC NG14000X design, has been specifically designed to meet the demands associated with working UK Round 3, Scottish territorial waters and the other North West European markets. The vessel will be the fifth new self-propelled jack-up to join the Seajacks fleet since 2009.

This is the second South Korean order for Huisman in a few months. Recently Hyundai Heavy Industries placed an order for a 600mt subsea crane and a 325mt vertical-lay pipelay system for a new heavy construction and flexible pipelay vessel.