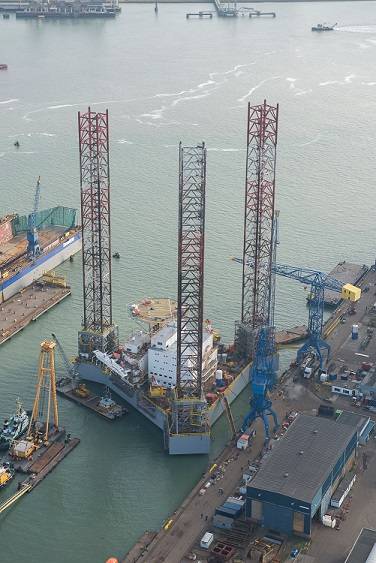 Alewijnse Marine Systems completed the electrical conversion of the jack-up rig Atlantic Amsterdam. The Atlantic Amsterdam has spent the last nine months at Damen Shiprepair Vlissingen being converted from a drilling rig to offshore hotel accommodation by Nordica Offshore Pte, Ltd. Alewijnse was responsible for the supply, installation, integration and commissioning of a number of critical electrical systems.

The Atlantic Amsterdam, formerly called Shelf Explorer, is owned by Atlantic Amsterdam Pte. Ltd. of Singapore, a subsidiary of Ezion Holdings Ltd. Lead contractor Nordica Offshore chose Alewijnse Marine Systems, which has a permanent representation at Damen Shiprepair Vlissingen, for the electrical conversion of a number of important systems.

In 2011, Alewijnse delivered the electrical installation of a similar project, the Atlantic Labrador, also at Damen Shiprepair Vlissingen. The electrical conversion of sister platform Atlantic London is in its final stages at ASL Shipyard in Batam, Indonesia.

Alewijnse expects more contracts to be awarded in the near future for the conversion of oil rigs to offshore hotels following the introduction of new safety regulations requiring that offshore workers be allowed on production platforms only during working hours.

In its role in the conversions, Alewijnse worked on a number of systems on each rig. These included the conversion and engineering of several 600/440/220V electrical distribution systems, along with the installation of an emergency shutdown (ESD) system.

Other installations included a completely new alarm system, back-up UPS facilities, a convertor with distribution panel for the new welding shop, life boat davits, deck and emergency lighting and various systems for the machinery deck. As well as those, a new jack-up alarm and monitoring system was installed to give a clear overview of the operational status of the motors, overloads and breakers.