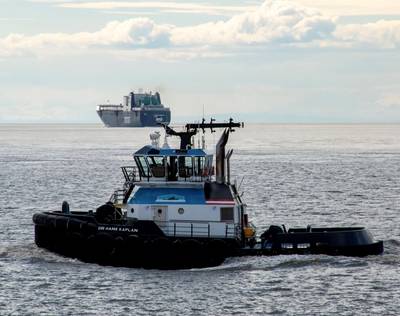 Alaska-based marine services frim Cook Inlet Tug & Barge said it has added another harbor tug to its fleet. The Dr Hank Kaplan is now homeported in Anchorage, where it entered service earlier this month.

Capt. Mark Theriault, Cook Inlet Tug & Barge’s director of operations, said, “The tug pack’s 30,000 gallons of fuel, 2,800 gallons of fresh water, and 370 gallons of lube oil – and not only opens up our operating window, but it is also just what our customers have been asking for”.

“This vessel brings additional capability to the Cook Inlet region while further supporting Alaska’s economy,” said Jeff Johnson, president of Cook Inlet Tug & Barge. “We are based in Alaska, operated by Alaskans, and acquiring the Dr. Hank Kaplan helps grow our fleet in our namesake’s region of Alaska.”

“This tug is built well, extremely powerful and complements the incredibly capable tugs we have in our fleet. It will help us grow our business while meeting our expanding customer needs,” said Mike O’Shea, vice president, business development and planning at Cook Inlet Tug & Barge.

The vessel is named in honor of the Chief of Medical Oncology at Swedish Cancer Institute in Seattle, who has worked throughout his entire career on cancer research and treatment.