US & China Join in Counter-piracy Exercises 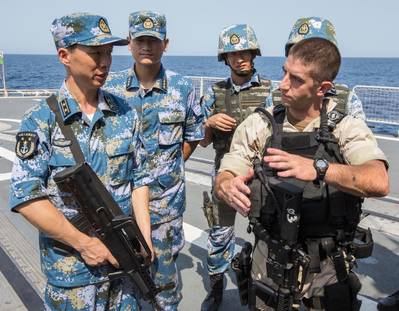 The guided-missile destroyer 'USS Mason' (DDG 87) personnel participated in a counter piracy exercise in the Gulf of Aden with elements of the Chinese People's Liberation Army (Navy) (PLA(N)), aboard the destroyer 'Harbin' and Chinese auxiliary replenishment oiler Weishanhu (AO 887).

The Chinese oiler played the role of a pirated vessel as VBSS teams from both Mason and Harbin performed two boardings as a combined unit. The U.S.-Chinese team successfully completed the VBSS evolutions that included mock medical emergency and hostage scenarios.

"Watching U.S. and Chinese sailors working side by side was amazing," said Cmdr. Wilson Marks, Mason's commanding officer. "We may come from different places and speak different languages, but at the end of the day, we all share a common interest in protecting the maritime domain."

The ships applied synchronized maneuvering techniques during a live-fire exercise involving an inflatable target. Mason and Harbin successfully engaged the target with the 5-inch MK-45 lightweight gun and 3.9-inch ENG-2 deck gun.  U.S. and PLA(N) helicopters also conducted cross-deck landing qualifications. These were the first ever such exchanges in which the U.S. and Chinese forces practiced interoperability in a major exercise.