Crew Kidnapped from Tanker in the Gulf of Guinea 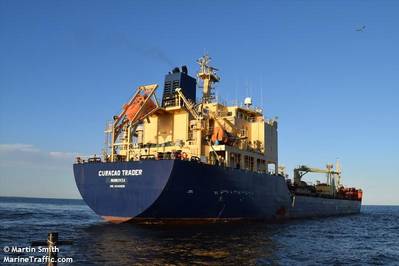 Armed pirates have reportedly kidnapped 13 seafarers from a Liberian-flagged product tanker in the Gulf of Guinea off West Africa, continuing a rise in attacks on vessels in the world's most dangerous piracy hot spot.

The Curcacao Trader was approached by eight armed individuals aboard a single speedboat and boarded 232 nautical miles southwest of Lagos, Friday. Among those abducted are seven Russian nationals, according to the Russian embassy in Nigeria. The other five crew members taken from the ship are believed to be Ukranian.

The 116.5-meter vessel had been sailing south after departing the port of Lomé, Togo when her speed dropped to 3 knots at the indicated time of attack, according to maritime security intelligence group Dryad Global. The vessel's AIS had ceased transmitting for a period of four hours, maritime security consultancy Praesidium International reported. The vessel is understood to have drifted for about three hours before returning to 10 knots. The vessel status is currently showing as "not under command".

The location of the incident is the furthest offshore an act of piracy has been recorded within the Gulf of Guinea, Dryad Global noted. It's believed that the perpetrators are being supported by a larger mother vessel, allowing them to sustain deep offshore operations beyond the reach of state counter-piracy efforts, the group said.

Crew kidnappings and violent attacks on vessels in the West Africa region have soared in 2020, with 77 seafarers taken hostage or kidnapped for ransom since January, according to the ICC International Maritime Bureau’s (IMB) latest piracy report.

The Gulf of Guinea is increasingly dangerous for commercial shipping, accounting for just over 90% of maritime kidnappings worldwide despite efforts by countries such as Nigeria who have sought to curb attacks against ships in the region.

This latest incident aboard the Curcacao Trader would bring the total number of kidnapped crew in incidents within the Gulf of Guinea to 91 across 18 kidnapping incidents, Dryad Global said.