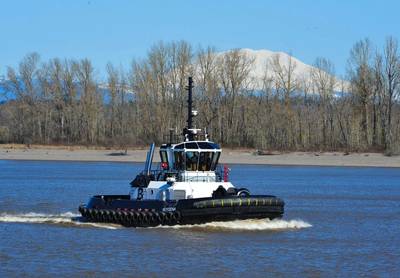 Crowley noted the Tier IV engines are environmentally friendly and fuel efficient, while maximizing performance, and exceed federal and the State of California’s environmental regulations.

“This high performing tug exemplifies our continued commitment to providing the best technology and performance in our fleet of tugboats on the West Coast. Our customers count on our fleet to be efficient and dependable, and Hercules adds another highly reliable asset,” said Johan Sperling, vice president for Crowley’s marine service group.

The tug will enter service in Puget Sound but is capable of handling operations in Crowley-serviced ports throughout California.

"The technology on the Hercules will ensure our customers get in and out of port efficiently to meet the demands of their supply chains, whether their vessel is a large tanker, a modern container ship, or other craft," said Porter Sesnon, general manager of Crowley’s ship assist and escort services.