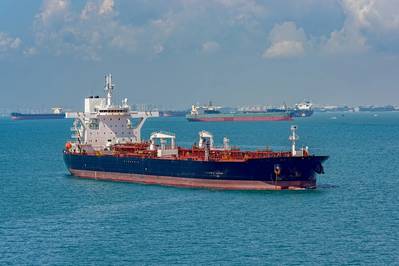 Traders are storing an estimated record 160 million barrels of oil on ships - double the level from two weeks ago as they seek to tackle a glut of stocks created by a slide in global demand from the coronavirus, shipping sources say.

Organization of the Petroleum Exporting Countries (OPEC) and other producers including Russia have agreed a record cut in output from May of 9.7 million barrels per day, or almost 10% of global supply, to help support prices and curb oversupply.

At the same time traders have rushed to find storage on land and at sea in what is believed to be the biggest oil glut in history.

This compared with 25 to 40 VLCCs already chartered with storage options at the start of April and fewer than 10 VLCCs in February, the sources said.

Smaller tankers were also being used, which was also boosting volumes being held at anchor, they added.

The last time floating storage reached levels close to this was in 2009, when traders stored over 100 million barrels at sea before offloading stocks.

"This is an unprecedented time in the history of tankers and while VLCC tanker storage is garnering the headlines, smaller crude and product tankers are also being used for storage," Gregory Lewis, shipping analyst with global financial services group BTIG, said in a note this week.

Locations typically include the U.S. Gulf and Singapore, where major oil hubs are situated.

The crude market is currently trading in what is known as contango, where forward prices are higher than immediate prices. This market structure encourages traders to park barrels in storage in the hopes of selling them for a profit later.

There are over 770 VLCCs in the world and analysts have estimated as many as 100 to 200 supertankers could be deployed for floating storage in coming months.

"The eventual wind down of this inventory glut will be most painful to tanker demand, but in the meantime floating storage remains the only outlet for a mismatched production and consumption backdrop," said Jonathan Chappell with investment banking advisory Evercore ISI.

Maersk Tankers announced it has sold six Long-Range 2 (LR2) product tankers in an en-bloc transaction.All six of the vessels…

Russia's biggest shipping company Sovcomflot says, according to Interfax news agency:The company is ready to buy back up to $400 million of Eurobond-2