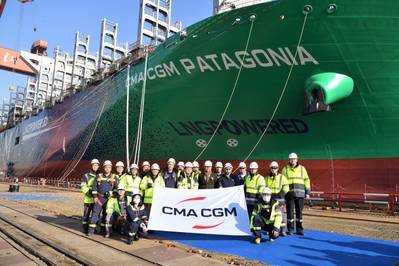 CMA CGM Patagonia, the first in a series of 15,000 TEU liquefied natural gas (LNG)-powered containerships for French shipping company CMA CGM, has been launched at the CSSC Jiangnan shipyard in Shanghai.

Ordered in 2019 and due for delivery in mid-August, the vessel is among a fleet of new box ships being put into service by CMA CGM that run on cleaner burning LNG fuel as a means to reduce shipping emissions.

After announcing three years ago that it would adopt LNG, CMA CGM has made several orders for gas-powered ships and now plans to have 26 such vessels operating by 2022 as part of efforts to reduce pollution in ocean shipping. A number of the vessels are already in service, including the 23,000 TEU CMA CGM Jacques Saadé, the first in a series of world's largest LNG-powered containerships.

Many shipowners have turned LNG fuel in response to tougher rules on vessel sulphur emissions that took effect at the start of 2020. LNG fuel is virtually sulphur free and can significantly reduce particulates and NOx emissions. It can also help to reduce greenhouse gas emissions.

CMA CGM, which is the world's fourth-largest container shipping company and operates about 500 ships in total, has said it aims to become carbon neutral by 2050.