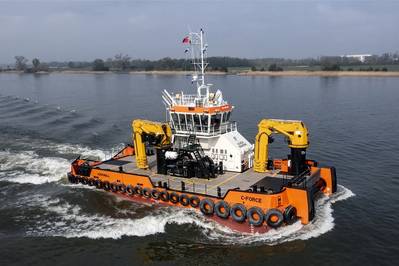 Damen Shipyards Group has delivered a Multi Cat 2712 to Orkney-based Leask Marine. The vessel has been delivered just six weeks following contract; a result of Damen’s series building philosophy. She will perform a variety of marine engineering-related tasks, including dive support, anchor-handling and cable-laying assistance.

The Multi Cat, named C-Force, is Leask Marine’s second Damen vessel. They have operated their first, the C-Salvor, a Multi Cat 2409, for many years. The company approached the shipbuilder with a request to deliver a new vessel very quickly.

Damen, known for building its vessels in series and for stock, we well positioned to assist, having a vessel available at one of its Dutch yards. The two companies signed a contract on March 3 and Damen handed the vessel over on April 19, just six and a half weeks later.

In that time, Damen carried out a series of adaptations to its standard platform in order to tailor the vessel to Leask Marine’s specific requirements. This included creating space for desks and computers in the wheelhouse so that Leask Marine’s clients can work during operations. It also included the addition of four winches for a four point mooring system.

Douglas Leask, Managing Director of Leask Marine, said, “We are particularly pleased to have purchased the Damen Multi Cat 2712, and the purchase of the C-Force is another significant milestone in the development of the business and provides a great enhancement to the range of services we provide. This is the latest of a number of significant investments over the past year and the result of this has been record growth for the business, working with some of the most recognizable international clients in the offshore marine renewables market.”

Damen sales manager Mike Besijn said of the order, “This has been an excellent project to work on. It’s had its challenges, not least of which was getting the vessel ready in a timeframe that was tight, even by Damen standards. However, we’ve enjoyed a great rapport with the company and in particular with managing director Douglas Leask and commercial director John Macleod. We understand each other very well and there has been an excellent level of trust and cooperation, which has helped to keep things precisely on schedule.”

C-Force left Damen’s yard on April 19 headed for Kirkwall. On her way, the vessel called in Dundee to conduct her first job—towage of the world’s most powerful tidal turbine, the Orbital O2 2MW device, to Orkney.

Following her arrival in her home port, Leask Marine will install dive support equipment to the vessel. After this, she will sail south to support operations at the London Array Offshore Wind Farm off Harwich.