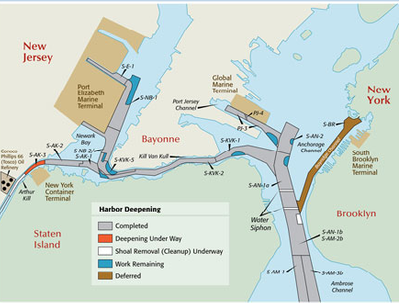 The Port of New York & New Jersey, in partnership with the U.S. Army Corps of Engineers, has completed a $2.1 billion Main Navigation Channel Deepening Program in order to facilitate the next generation of larger containerships calling the port following the expansion of the Panama Canal.
The Port of New York and New Jersey serves as the gateway to one of the most concentrated and affluent consumer markets in the world. The Main Navigation Channel Deepening Program creates a safe and economically efficient pathway for the newest generation of containerships calling the Port of New York and New Jersey, the port said.
The Main Navigation Channel Deepening Program was initiated prior to the announced improvements to the Panama Canal. In total, 38 miles of federal navigation channels in the New York Harbor have been deepened to a navigable depth of 50 feet between 1989 and 2016. Costs for the program were shared between The Port Authority of New York and New Jersey and the U.S. Army Corps of Engineers.
“Completion of the 50-foot channel deepening project is a major milestone in our efforts to meet the needs of our region’s 23 million consumers now and in the future,” said Port Authority Port Department Director Molly Campbell. “It culminates more than 25 years of work and $6 billion in public and private sector investment to ready the port for the new generation of vessels, and will continue to support the 336,000 jobs and billions in economic activity the port generates.”
Next-generation containerships will save transportation costs on consumer products arriving from overseas. But the Main Navigation Channel Deepening Program offers benefits beyond the fiscal. Neo-Panamax vessels are also more environmentally friendly, sporting more fuel-efficient engines and equipped with the latest air emission control systems.
Sand dredged from the channels was used to restore wetland habitats at several marsh sites within Jamaica Bay, N.Y. and wetlands within an existing impacted brownfield site in Lincoln Park, N.J. Approximately 900,000 cubic yards of sands and glacial tills from the Port Jersey Channel was used to restore shallow water fish habitat in an unused navigation channel south of the former Military Ocean Terminal in Bayonne, N.J.