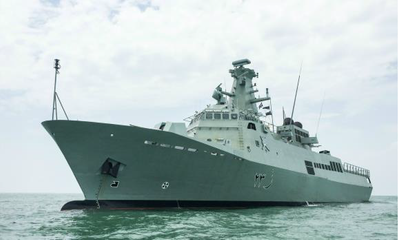 Singapore Technologies Marine Ltd (ST Marine), the marine arm of Singapore Technologies Engineering Ltd (ST Engineering), today held the Interim Delivery and Acceptance ceremony for the third Patrol Vessel (PV), RNOV Sadh, together with the Naming Ceremony for the fourth PV, RNOV Khassab, built for the Royal Navy of Oman (RNO). The Guest-of-Honor was the Commander of the Royal Navy of Oman, Rear Admiral (RADM) Abdullah bin Khamis bin Abdullah al-Raisi.
The contract for the design and build of the four Al-Ofouq class of PVs was awarded by the Ministry of Defence of the Sultanate of Oman in April 2012. It was the largest defence export contract in ST Engineering’s history. These four vessels will replace the Sultanate’s current four Seeb class PVs commissioned in the early 1980s.
The Al-Ofouq class of PVs measures 75 meters in length and displaces approximately 1,250 metric tons. Armed with a modern weapon and combat management system the PVs are most suited for a variety of maritime and homeland security missions such as undertaking extended surveillance patrols of the Sultanate Exclusive Economic Zone.