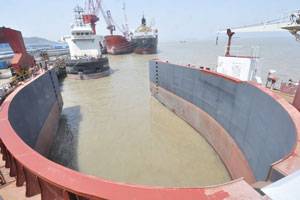 Early in May the COSCO (Zhoushan) Shipyard will deliver one of two articulated tug barge units on order from their Italian customer Ilva Servizi Marittimi S.p.A. The Italian-flagged tug, named Corona Australe, is fitted with a three-point Matsui Corp coupling system.

Cummins power also features prominently on the two identical barges that have been built for each tug. Each of the 492 ft by 78.5 ft barges are equipped with a pair of Cummins powered 200 kW generators. The barges will have four holds designed to carry steel coil, steel plate and slabs for the owners. With two barges for each tug, one can be left for cargo handling while the second is in transit with the tug.

Both tugs and barges will be classed by RINA. Design specifications called for a speed of not less than 13.8 knots at 85% of MCR (full loaded pushertug combined with full loaded barge at moulded designed draft, without sea margin). The 15000-dwt barges will have a hold volume of 13000 cubic meters.