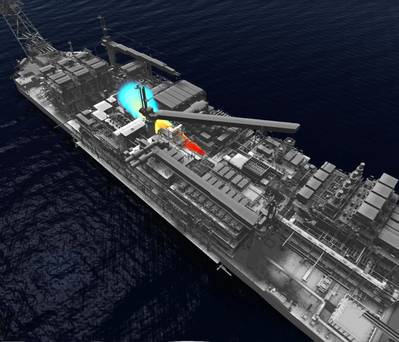 BMT Fluid Mechanics (BMT), a subsidiary of BMT Group Ltd., completed a Computational Fluid Dynamics (CFD) study for an oil major operating offshore Nigeria. BMT reports that its scope of work included an assessment of the current loading to which the FPSO hull is subjected to, which has enabled the oil major to ensure its mooring systems are fit for purpose.
“CFD is becoming more commonplace in the oil and gas sector with many customers recognizing it to be an effective tool for solving challenges the industry faces in a less conservative and more efficient manner," said  Johnathan Green, Manager for BMT Fluid Mechanics’ Numerical Modelling Group. "In this project, we were able to use CFD to more accurately analyse the hydrodynamic forces caused by current and waves and asses the subsequent effect these forces have on the bilge keels of the vessel which are designed to stop the vessel from rolling.”
Through the creation of a 3D CAD model and representation of the FPSO below the water line, BMT's team were able to run a comprehensive experimental and numerical study of the maneuvering characteristics. This looked at different parameters of current conditions to help build up a picture of how the forces and motions impact the vessel and how it performs.
“The benefit of using CFD in this study is that the customer can use the less conservative loads estimated to help design the mooring systems," said Green.