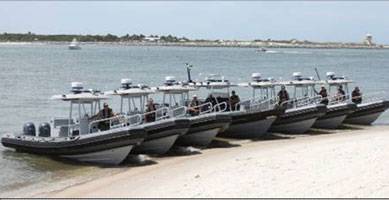 Brunswick Commercial and Government Products (BCGP) recently delivered a fleet of seven Impact rigid hull inflatable boats (RHIBs) to the state of Florida’s Fish and Wildlife Conservation Commission (FWC). The group of RHIBs is a mix of 750, 850 and 1000 Impacts, ranging in size from 24 ft, 7 inches to 32 ft, 10 inches in length. Each boat has an air collar system made of heavy-duty polyurethane with separated chambers, and a hand-laid fiberglass hull. The seven Impacts will be deployed in various locations throughout the state of Florida. Most will be used for routine patrol and boating safety enforcement, but a few will be on special detail in the Gulf to assist with oil clean-up.

“FWC needed fast boats with good fuel economy, but also boats that could handle constant boardings,” said Jeremy Davis, BCGP’s sales manager. “The Impact RHIBs were a great choice, as these boats can run up to 60 mph, and the collar system is very forgiving when an officer comes alongside another boat or approaches a dock.”

“The biggest requirement was that these boats had to be an ‘office on the water,’ meaning the patrol vessels needed to have the same capabilities on the boat as officers in a vehicle,” said Davis. “Each of these boats has a dedicated spot for a laptop right at the helm. It’s a patent pending option that consists of a swiveling arm to position the screen in view of either the captain or another officer. The officers can print citations or look up registration numbers, just like they would be able to on the road. The officer has the information he needs at his fingertips, then he can stow the computer out of sight.”

All of the boats feature a set of bow boarding rails, making on-and-off boarding safer for the crew. For operations that would involve multiple officers, such as homeland security, an extended 12-foot T-top on the 10 meter Impact allows up to four crewmembers to be on patrol at a time. The boats are outfitted with a full array of navigation equipment, including high definition radar, chartplotter, GPS, a remote control spotlight, and Whelen LED light bars. Heavy duty aluminum leaning posts on each RHIB can store up to four shotguns or rifles in a lockable compartment.