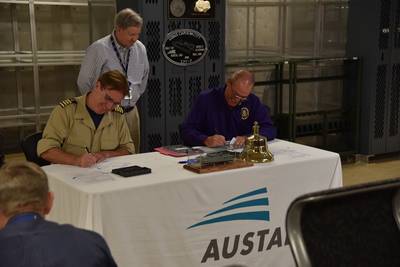 Austal USA’s Expeditionary Fast Transport (EPF) team finalized the delivery of USNS Carson City (EPF 7) to the U.S. Navy during a small document-signing event held onboard the ship on June 24, 2016.

The EPF program provides the Navy with a new high-speed intra-theater transport capability. The 338-foot long Carson City is an aluminum catamaran capable of transporting 600 tons, 1,200 nautical miles at an average speed of 35 knots, and is designed to operate in austere ports and waterways, providing added flexibility to U.S. warfighters worldwide. The ship's flight deck can also support flight operations for a wide variety of aircraft, including a CH-53 Super Stallion.
The latest delivery marks the seventh EPF ship delivered to the Navy as part of a 10-ship, $1.6 billion block-buy contract.
Upon delivery of USNS Carson City, three additional Spearhead-class EPFs are under construction at Austal’s Mobile, Ala. shipyard. Yuma (EPF 8) is being erected in final assembly and modules for City of Bismarck (EPF 9) and Burlington (EPF 10) are under construction in Austal’s module manufacturing facility.
In addition to the EPF program, Austal is also under contract to build Independence-variant Littoral Combat Ships (LCS) for the U.S. Navy. Four LCS have been delivered, including the future USS Montgomery (LCS 8) which was delivered late last week, while an additional six are in various stages of construction.
“Austal is proud to provide the U.S. Navy’s Military Sealift Command fleet with yet another great ship,” Austal USA President Craig Perciavalle said. “The EPF vessels in service today have already proven to be a valuable resource for our nation performing humanitarian missions and other necessary fleet services world-wide and we’re excited to deliver another ship that will add to that global capability.”
“The EPF program has rapidly matured over the last couple of years, a testament to the hard work and dedication of Austal’s talented shipbuilding team,” Perciavalle said. “We are delivering incredible ships for our nation’s defense and with each new ship delivered we further improve and enforce our reputation as a major U.S. defense contractor.”